GoingTo Libya Is Using Your Hands To Dig Your Own Grave 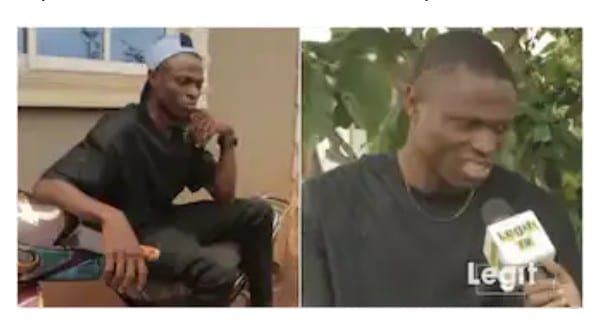 A 25-year-old Nigerian man, Solomon Obie, said he went through hell after embarking on a journey to Libya

He said embarking on a journey to Libya is like paying for one’s death, adding that if anyone survives the desert, they may be kidnapped in the North African country

Sharing with  Legit TV, he stated that  he left the shores of the country for Libya because he wanted a better life for his family.

“Solomon, who returned to Nigeria in 2017, said people were drinking their own urine and refusing to share with others who were also thirsty.

According to the young man, a lot of people died in the desert because there was no means of survival when their vehicle broke down.”

“Solomon said photos of Nigerians who left the country for Libya and eventually got to Europe influenced him to embark on the journey without understanding what those people went through.”

“He said if anyone survives the desert, they may be kidnapped in Libya and their families will be contacted to pay ransom.”

He went to prison twice

Solomon, who wanted to cross to Germany through Libya, said he went to prison twice, adding that almost 300 people were put in a small room.

“I went to prison twice. Almost 300 people were put in a small room the size of parlour. The money they were demanding was too much. But God helped us. We ran out of the building. They were shooting at us and some were hit with bullets.”

Solomon said some pregnant women who gave birth in the North American country abandoned their babies because they couldn’t take care of them.

The young man has advised people against travelling to Libya in the hope of migrating to Europe, saying the experience is not palatable.

Legit.ng previously reported that Stanley Ogieriakhi, a Nigerian man who returned from Libya after losing

Are You Happy In your Relationship?hope

Ladies, Can You Rock This Hairstyle?