Missing Housewife: We Raped Her Till She Died Then Sold Her Body Parts -Suspect Makes Chilling Confession - amanaija
News

Missing Housewife: We Raped Her Till She Died Then Sold Her Body Parts -Suspect Makes Chilling Confession 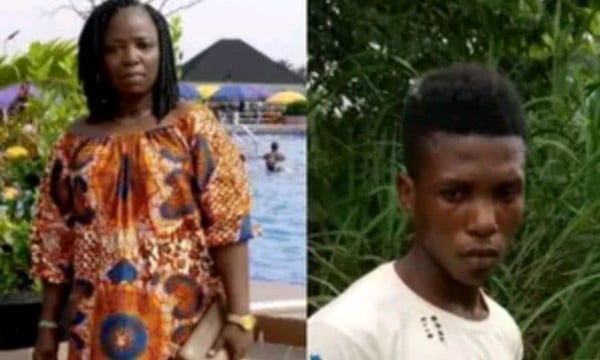 The world is wicked…..

So sad that we live in a works where people can do anything just for money.

A suspect has just confessed to the killing of a housewife. According to him, him and another man raped a housewife till she became unconscious and died. After which they plucked out her eyes, cut her organs and them sold them for the sum of N100,000.

“The woman was said to have boarded Simon’s motorcycle so he could show her where to buy pepper, but he later took her to his shoemaker friend, Akpoghene ” “While Simon and Akpoghene were escorting her through a bush, the woman suspected foul play and declared that she would no longer purchase the pepper and decided to return. On the way back, Akpoghene struck the woman with a machete, causing her to collapse

The victim, Mrs. Patience Komore, was reported missing after mounting Simon’s motorcycle at the Umeh Market in the Isoko South Local Government Area, said the Commissioner of Police, Mohammed Ali, while parading the suspects at the police headquarters in Asaba.

Meanwhile, police said the woman’s decomposing body had been recovered from the scene and deposited in a mortuary. “