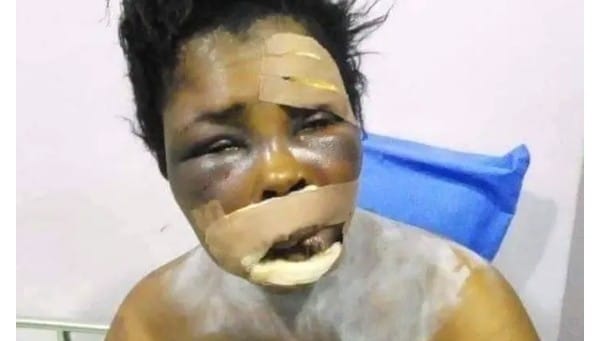 A young Nigerian man, Emma Eregarnoma reportedly invited his mother, Mrs Oke Eregarnoma, to his house on Caroline Street, Okuokoko after he lied to her that he had a  surprise package for her. According to the woman who narrowly escaped death, she met her son in an exceptionally happy mood. He welcomed her and increased the musical gadgets in the house but she didn’t suspect anything.

Madam Oke stated that her son suddenly locked the door and made moves to strangle and pluck off her eyes but  she began  screaming  for help, adding but but no one heard her as a result of the  loud music.

“She said after fighting with his son for some minutes she regained her strength and ran outside for help, while neighbours came tstation in warri.

Mrs Oke Eregarnoma, while narrating her ordeal to journalists on a hospital bed where she was recuperating, recalled that before the attack, her son boasted that “he must drive GLK this week”

The suspect has been arrested   and taken to the police station in warri.

According to report, the  Police Public Relations Officer, Delta State, confirmed the incident, adding that the suspect was in custody.

Relationship Counsellor, Funke Adejumo Speaks On The Need To Dress Well As A Married Woman